By Laura Kusisto and Christina Rexrode 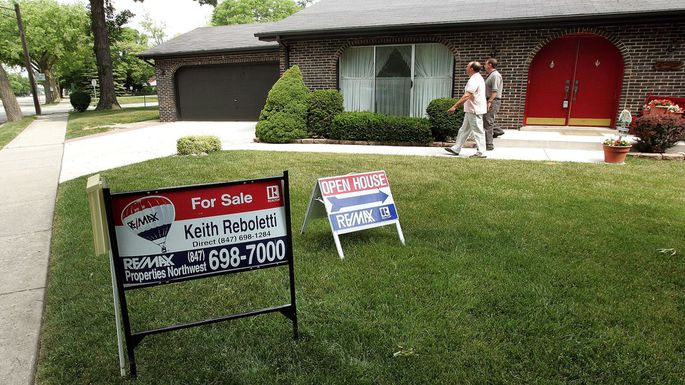 Mortgage rates hit their highest level in more than seven years this week at nearly 5%, a level that could deter many home buyers and represents another setback for the slumping housing market.

The average rate for a 30-year fixed-rate mortgage rose to 4.9%—the largest weekly jump in about two years—according to data released Thursday by mortgage-finance giant Freddie Mac.

Lenders and real-estate agents say that, even now, all but the most qualified buyers making large down payments face borrowing rates of 5%.

Rates have been edging higher in recent months, but during “the last week we’ve seen an explosion higher in mortgage rates,” said Rodney Anderson, a mortgage lender in the Dallas area.

A 5% mortgage rate isn’t that high by historic standards. During much of the decade before the financial crisis, these rates hovered between 5% and 7%. But a return to more normal lending rates won’t feel normal to many buyers who have become accustomed to getting a mortgage loan at 4% or lower, and they could experience sticker shock at what they would have to pay now for a home loan.

“There’s almost a generation that has been used to seeing 3% or 4% rates that’s now seeing 5% rates,” said Vishal Garg, founder and chief executive of Better Mortgage.

For a house with a $250,000 mortgage, rates of 5% add about $150 to the monthly payments compared with the rate of 4% that borrowers could have had less than a year ago, according to LendingTree Inc., an online loan information site. That excludes taxes and insurance.

With rates hitting recent highs at a time when housing prices have been going up, too, some economists suggest sellers may need to lower prices if borrowers can’t afford high prices in a higher rate environment.

Higher mortgage rates have also slowed the housing market more than many expected. That’s a potentially troubling sign for the broader economy, since housing is often a bellwether for how rising interest rates could affect growth overall.

Many buyers who are struggling to find a home they can afford because of high prices are more sensitive to rising rates than they have been in the past.

Existing home sales fell in August from a year earlier, the sixth straight month of declines. Many would-be buyers sat out the buying season because of high housing prices, a historic shortage of homes to buy, and a tax bill that reduced some incentives for homeownership. Higher mortgage rates will likely compound their hesitation.

“With the escalation of prices, it could be that borrowers are running out of breath,” said Sam Khater, chief economist at Freddie Mac.

Once-hot markets are showing signs of cooling down. Bill Nelson, president of Your Home Free, a Dallas-based real-estate brokerage, said that in the neighborhoods where he works, the number of homes experiencing price cuts is more than double the number that are going into contract.

Brad and Virginia Reitinger closed on a new home in Dallas two weeks ago, and opted for an adjustable-rate mortgage so they could get a 4% rate. With a fixed-rate 30-year loan, they would have had to pay 4.5% to 5%, Mr. Reitinger said.

He added that the prospect of rates going even higher motivated them to move quickly on buying the new home. And if they had opted for a fixed-rate mortgage, he estimates, their monthly payment would have been higher by a couple hundred dollars. “When you run the numbers, it makes a big difference,” he said.

Adjustable-rate mortgages, which reset to market rates after a certain number of years, typically offer lower rates than fixed-rate mortgages at the beginning of their term. Some lenders say they have seen a surge of customer inquiries into the product as rates rise. They remain a relatively small part of the mortgage market, though: They made up about 12% of mortgage originations in the second quarter, according to industry research group Inside Mortgage Finance.

The rise in rates could have far-reaching effects for the mortgage industry. Some lenders—particularly nonbanks that don’t have other lines of business —could take on riskier customers to keep up their level of loan volume, or be forced to sell themselves. Many U.S. mortgage lenders, including some of the biggest players, didn’t exist a decade ago and only know a low-rate environment.

Long-term mortgage rates now have climbed nearly a full percentage point from 3.95% at the beginning of this year. House hunters who started searching months ago are acutely aware of the rise in rates.

"We have some people who prepared themselves early, and bless their heart for doing it—that’s what I’ve been preaching,” said Rick Bechtel, head of U.S. mortgage banking at TD Bank. “And they’re the ones who are most pained.”

A spate of recent positive economic news helped drive the 10-year Treasury note, to which mortgage rates are closely tied, to a seven-year high last week. The Federal Reserve, which has raised its key policy rate three times this year, is expected to do so again in December.

And higher rates will likely kill off any lingering possibility of a refinancing boom, which bailed out the mortgage industry in the years right after the 2008 financial crisis. If rates hit 5%, the pool of homeowners who would qualify for and benefit from a refinance will shrink to 1.55 million, according to mortgage-data and technology firm Black Knight Inc. That would be down about 64% since the start of the year, and the smallest pool since 2008.

Higher rates will be hardest on first-time buyers, who tend to make smaller down payments than older buyers who have built up equity in their previous homes, and middle-income buyers, who can least afford the extra cost. Mr. Khater said that about 45% of the loans that Freddie Mac is backing are to first-time buyers, up from about 30% normally, which also means that rising rates could have an even bigger impact on the market than usual.

“Affordability has already been an issue for consumers across the country,” said Sanjiv Das, CEO of Caliber Home Loans Inc., one of the biggest mortgage lenders in the country. “Now it becomes an even bigger issue.”


Print Details
Previous post
Next post
What Size Storage Unit Do I Need? And Other Questions to Ask When Picking a Facility
How to Buy a Home FastEven Before the Holidays!