6 Holiday Fire Hazards That You Definitely Want to Avoid 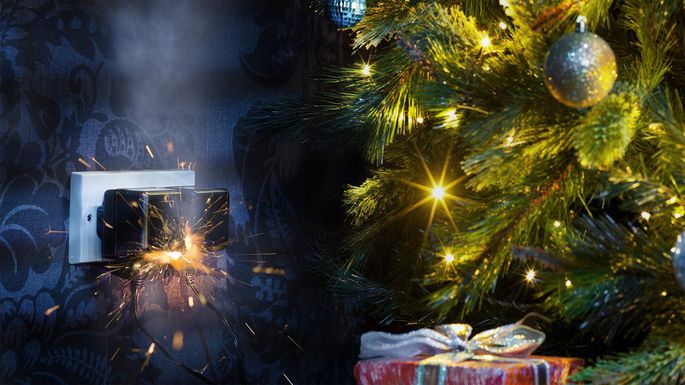 The holidays may be billed as the most wonderful time of the year, but they're also a prime time for unexpected dangers—like house fires. Everything from that deep-fried turkey to your Christmas lights to fried Hanukkah doughnuts can spark a blaze, so in an effort to keep your festivities from taking a dark turn, here are some common house fire hazards during the holidays—and some preventive measures you can take to avoid them. Consider yourself warned!

From 2010 to 2015, live Christmas trees caused an average of 200 home fires annually, according to the National Fire Protection Agency. Those fires resulted in an annual average of $14.8 million in property damage, 16 injuries, and six deaths.

And a Christmas tree, especially a dry one, is basically just tinder draped in tinsel. There are several ways a Christmas tree fire might get started. The tree can be placed too close to the fireplace or burning candles. It may have too many strings of lights hooked together that overload, sparking a fire. Or, it may be placed close to an electric heater that overheats, sending sparks into the tree.

"Go LED," he says. "They use far less electricity and generate less heat. They're safer. Old ones start to fray, and they end up with problems."

Also, don't forget other live decorative greens, like indoor or outdoor wreaths and garlands. They can have the same issues if they have strings of lights on them. Robenolt has seen front doors catch fire from dry wreaths that have ignited.

The biggest day of the year for oven fires is Thanksgiving, according to the NFPA. Christmas Day is a close second.

"The No. 1 cause of oven fires is that grease builds up in the oven and can light up," says Robenolt. "People have a tendency to not keep them as clean as they should."

Fires can start in both gas and electric ovens. So if yours catches fire, what should you do?

"The best thing to do is to keep the oven closed and call the fire department," says Robenolt. "You won't give the fire oxygen. If you open the door and hit it with a fire extinguisher, the force from the extinguisher could force the fire out onto the floor."

There are ways to make an oven fire much less likely. First of all, keep the oven clean. Don't let grease build up in it. Also, use drip pans under any foods that might drip, whether it's turkey or apple pies.

Propane deep fryers that are popular for cooking turkeys can easily cause a fire, too.

"If you're going to fry a turkey, you really need to know what you're doing," Robenolt says. "Keep the fryer a safe distance away so no one can run into it. Measure oil levels properly. Keep a fire extinguisher nearby. And, always do it outside on the grass, not on the deck, front porch, or near your cars."

Also make sure the turkey is not wet or frozen. The reason: When water hits the hot oil, it spatters, which can burn people nearby. The fryer can also get knocked over and start a fire.

Finally, don't store the propane for the fryer in the house.

The Jewish Festival of Lights is also associated with fire risk. In 2017, a mother and three children in Brooklyn, NY, were killed in their sleep by a fire ignited by an oil-burning menorah, a type of candelabra. Always set a menorah, whether oil-burning or candle-bearing, firmly on a level surface, away from any flammable materials. Do not let it burn unattended.

Cooking the fried foods (e.g., latkes and sufganiyot, a jelly doughnut) that are traditional at Hanukkah could also be hazardous. The NFPA warns people to always stay in the kitchen while frying foods. Keep flammable items like oven mitts and paper towels away from the stove, and if a pan catches fire, cover it with a lid and turn off the heat.

There never seem to be enough outlets during the holidays, so as a result, people often overload the outlets they do have, which can cause fires.

"If you're going to plug several things into one outlet, you should use a surge strip," says Robenolt. "If it heats up, it should shut itself off."

Another way a fire can start is with an overheated extension cord.

"People tend to have an extension cord to the tree without a surge protector, and then they pile stuff such as presents and tree skirts on top of the cord," he says. "The cord can heat up and light things on fire."

So keep extension cords uncovered to prevent them from overheating.

"If you have electric baseboard heaters, you want to make sure you maintain all the clearances," says Robenolt. "When people start rearranging and crowding things in for the holidays, they sometimes put things such as a couch against the baseboard."

Those items restrict airflow and overheat the electric baseboard heaters, possibly causing items pushed against them to catch on fire. To prevent this, make sure to meet the unobstructed clearance around the units: 1 foot in front of the unit; 6 inches on either side of the unit, and 12 inches above the unit.

Print Details
Previous post
Next post
'Tis the Season (to Sell): 6 Reasons You Shouldn’t Take Your Home Off the Market for the Holidays
What Is a Home Equity Loan? How It Works vs. a Home Equity Line of Credit